"Riding a race bike is an art - a thing that you do because you feel something inside."

Jonathan, or Jospeed, is an external IT service provider for Mindful Wealth and InMindful. Jo is also the 2017 champion of Pirelli Malaysia Superstock. Mindful Wealth has been a sponsor of Jo's racing activities from the very beginning, even prior to rebranding from EOF. It helped him realize his dream for racing and fulfill his passions.

Jo’s father wanted to sell his motorbike and buy a scooter because he felt he was getting old. Turning only 50, Jo bought him a day at the track with an instructor for his birthday, which they did as father and son. This ignited the passion to race and following his idol, Valentino Rossi, Jo signed up for the Pirelli Malaysia Superstock shortly after. This racetrack is located in Sepang, an hour’s drive from Kuala Lumpur and about 4 hours from Singapore, if you are lucky with the Malaysian traffic.

Jo signed up for the category that best fits his racing background. To qualify for the advanced category, you had to first be an experienced rider and qualify with a minimum time of 109% from the fastest rider. The race coordinators placed him in this category, not because of his qualification time and experience, but due to his Singaporean international license. Jo bought a brand new Yamaha R1M that he affectionately calls baby. The bike has a 1000cc engine that can produce 182 hp. Acceptable modifications were made to the electronic control unit (ECU), fairings and exhaust which reduced the weight to about 180kg.

The race number that he chose was to represent his birth year, 84. The racing authorities had initially accepted this selection and Jo proceeded to stick the number decals on his baby. It was only after reaching the racetrack and realising there was a miscommunication, he had to pick another number. Having decided to use the decals he designed, he switched the numbers around. Jo’s race number became 48. Most racing teams usually have a team consisting of engineers, mechanics and most importantly, an umbrella girl. Jo’s team was essentially a one-man show, with the assistance of one or two relative and friends who were able to travel down to Sepang for the weekend.

The nervousness and the lack of racing experience led to a memorable start of the season. At the very first round, Jo forgot crucial equipment at the hotel - his racing suit and helmet. His father had forgotten to remove the bike stand when Jo was in starting position on the grid for his first race. During race 1, the nerves had especially kicked in when the bike did not accelerate right when the race started, costing him seconds on his time. Jo had not put the bike in gear. All the other riders had taken off and shortly after, the safety car overtook him. Jo was in the last position at the start of the race, which usually has about 30 riders per race. By the end of it, he had gained the 9th position. Jo finished the 2016 season in 5th place overall with 4 podiums in the last 4 races. It was a highly commendable finish for an inexperienced racer in an advanced category.

Throughout the race, with the help of his family and friends, Jo’s performance and strategy were analysed closely. Improvements to racing techniques and strategies were made each time following a race. He learned a lot about racing preparations, race behaviors and most importantly, how to ‘listen’ to baby. With all this knowledge and experiences, Jo continued onto the next season.

The following season in 2017 saw Jo winning the championship with his baby. There was a stiff competition between him and Mohd Hafiz Nor Azman, #98, who entered the competition late and was a semi-pro rider. Despite #98 having professional support, Jospeed still won the championship.

This year, Jospeed has introduced his new baby, a new Yamaha R1, and will be racing in the Superbike series, a higher racing segment. 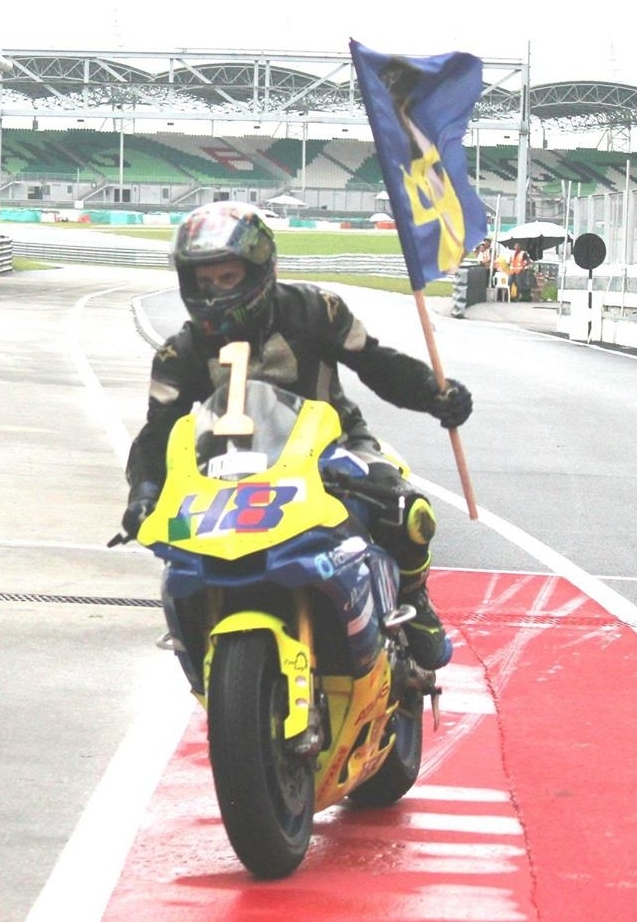 Jospeed after winning the 2017 Championship

Federico Cristina and Jo's father, prior to re-branding of EOF to Mindful Wealth

JoSpeed's Results from his second series, 2017